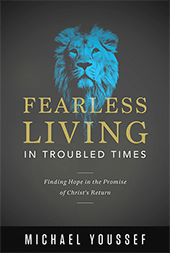 The search for purpose can be overwhelming. We want to do what we are called to do, but what is it we are called to? Jonathan Youssef and special guest Clay Kirkland tackle the topic of a person's purpose, seek to de-mystify the idea of God's calling, and discuss how to practically pursue good works in the absence of a burning bush—no matter the season of life.

This interview is condensed and excerpted from episode 73 of Candid Conversations with Jonathan Youssef. Listen today on your favorite podcast platform or online.

"Every purpose that you’ve been created for is meant to be done in partnership with God."

Jonathan: We're talking about work, vocation, and calling, and you served for nineteen years in a university ministry role. I'm sure that this issue came up quite a number of times with college students who were determining what their next steps would be, what their future would hold from a work perspective and even from a missional perspective—How do I serve God and earn a living at the same time? How would you help them formulate a foundation from which to start to answer these questions?

Clay Kirkland: I honestly didn't find many young adults who had a great foundation in this subject. What I would find was either a lot of misinformation or just a lack of information. So I would try to de-mystify it by giving them a different way to talk about it. Instead of "Let's talk about calling," I'd say, "Okay, let's move into this idea of purpose," because that's really what they're asking for: "Do I have purpose, and what is it?" The idea of ‘calling' is so mysterious, and we read a few stories in the Bible and see these mystical, supernatural things, and then they haven't necessarily had that happen.

Clay Kirkland: That's right. They've been waiting to be blinded by the light and nothing has happened, so they feel stuck. I would always try to move them into this idea of their primary calling. [As Os Guinness said,] "There's no calling without a caller." You've got to know the caller before you understand and pursue what the caller is going to give you. Let's make sure that you're not reorganizing the priority list in any way: (1) You were made for God, and (2) He has created you for good works. Your identity in Christ is where you start from.

Jonathan: What were some of the most common misconceptions you saw?

Clay Kirkland: An easy one would be that either you received a calling and that meant you were going to be in ministry, or you didn't receive a calling and that meant you were just going to have a "regular job." There's this sacred/secular divide by which we elevate ministry positions and devalue any other job or calling that you might have. That was the primary misconception. It was "My friend answered an altar call to be a missionary, and I've been studying to be a science professor. I know that God is going to use my friend, and maybe I can make enough money to support him. That's probably what my purpose is." There's nothing wrong with supporting ministry, but that's not all that God has created that person to do.

Another common misconception was the belief that once they received their calling, it was this one vocation that would never change and would have to look a certain way for it to be real. But if you look in the Bible, there are seasons for every person. There were seasons for Jesus. The idea is that we're created for good works—there's a reason Paul pluralized that word—because there are several things that you're going to do. We have all done things that lasted a certain amount of time, and they had purpose in them and purpose for them. Sometimes they lasted a day; sometimes they lasted a year; sometimes they last a lifetime. But not everything that you are "called to do" will last a lifetime.

When we find our purposes, they are to put God's goodness on display. This is ultimately about God—what we're doing is reflecting His goodness. As you think of your calling and purpose—and pluralize that to purposes—remember that every purpose that you've been created for is meant to be done in partnership with God.

There are two primary ways God communicates in the Bible. He does it by way of revelation, and He does it by way of wisdom. You can put any communication you receive from God into one of those two camps. The revelation one's easy: You see that when the burning bush comes, when the heavens split open and the voice comes down, and with Paul and the blinding light. It's just those holy moments that we might have in our lives where God speaks very clearly.

Then you've got this idea in the Bible where people make decisions not by direct revelation or illumination from God; they make it through wisdom. You see one of the most critical decisions ever made in the New Testament in Acts 15 about the church and the direction it's going to go with the Jews and the Gentiles. Their comment after weeks of deliberation and prayer was "It seemed good to us and to the Holy Spirit," like they had determined through their wisdom that this was the right way to go. So at that point it's determining what your options are and what seems to be the wisest choice in this moment. You still make that choice with God because God is our source of wisdom.

Jonathan: For the person who feels like they're not getting clarity or they fear making the wrong choice, how would you counsel them?

Clay Kirkland: God's not waiting around the corner going, "I really hope they blow it this time because I cannot wait to rub it in their face!" This is a partnership. He is for you. A lot of the time, that fear of making the wrong choice is not a fear that is inspired by God, and so I would always challenge that "wrong choice" fear. If God's the caller, then you're responsible for what you are being called to. And if God has chosen in His infinite wisdom to not give you this direct revelation and has chosen to communicate to you through wisdom, then He understands your level of understanding regarding the choices that you're having to make, and you're responsible for that level of understanding.

Jonathan: Do you feel like our churches these days do a good job of affirming people [in their calling]?

Clay Kirkland: There is a massive need, especially among teens and 20-somethings, who really would benefit from the older generation speaking that life and confirmation to them. Whether you call it discipleship or mentoring—we need to look outside of ourselves, look toward other people, and call out that fingerprint of God that we see in others. And we don't have to see everything to see something. But what you see, then, is what you need to say. If we can practice saying what we see, we would do right by so many people.

Jonathan: And at the same time, we need to have ears to hear when that comes our way. I think sometimes we get caught up looking in the clouds, waiting for some divine sign when it's maybe the person in the pew who is saying something to us. What do you think are our greatest hindrances to obeying God's call on our lives?

Clay Kirkland: [I think the greatest hindrance is the] fear of getting it wrong, fear of what God would do if we did get it wrong. But if we were just to pull back and think about God and who He is, we would realize pretty quickly that God is not caught off guard by our swings and misses. I think He can handle it. God is kind enough, because He knows what's best for us, to never eliminate trust in this discovery process of our calling. Because when we trust Him, we have to get near Him and stay near Him, and that's what is best for us.